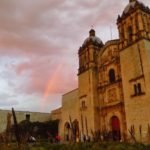 Church of Santo Domingo – with a very auspicious rainbow.

Oaxaca – January 19, 2018 –  During my career as a travel journalist, I’ve embarked on many quests: seeking out Paul Bowles in Tangiers; trying to circle Mt. Kailash in Tibet; looking for someone who could cure my “black tongue” syndrome in Senegal. I’ve searched for female lamas, left offerings of milk to attract sacred nagas, and attempted to circle the world without setting foot on an airplane.

The quest I’m on now is closely related to that last one. In 1993 and 1994, while writing The Size of the World, I managed to perform a kora – a devotional circumambulation—around the planet. The journey included 27 countries, and took nine months. It began with a BART ride from Oakland into San Francisco, and a drive all the way down through Mexico. One of the most wonderful places on the trip was the city of Oaxaca, which – next to Mexico City itself – is the cultural capital of this supremely artistic country.

In January of 1994, I stayed in Oaxaca for about four days before continuing my travels toward Guatemala. Two momentous things (in my life, at least) happened during that time. First – after a maddening series of techno-trials – I wrote, uploaded and published (on the World Wide Web) what is now acknowledged as the world’s first travel blog.

The other wonderful occurrence was exploring the city with a local family. During my visit I stayed at the modest casa of Rosa Limon, a lovely abuela who lived near an overgrow park and playground. Rosa introduced me to her son, Fernando – an architect only two years my junior – and his wife, Charlene, a therapist. Along with their daughter Luisa, who was eight, we toured the city for days – visiting Oaxaca’s famous Catedral and zocola, the vast, stunning ruins of Monte Alban, and innumerable ice cream parlors.

Though I fell in love with Oaxaca, I was equally smitten with Charlene and Fernando’s daughter. Luisa was droll, ironic, and frighteningly precocious. Her observations on the city, and life in general, were so unexpected that I wanted to include a chapter about her in my book. She gave it a moment’s though, then shook her head. “No… I don’t want you to write about me,” Luisa said.

“That’s right,” Luisa replied quietly. “But stars have to live way up there.” She pointed her finger heavenward, then down to earth again. “And I’m perfectly happy right here.”

I wrote about her anyway, of course. Or included her, at least, in my chapter about Oaxaca. The Size of the World was published 23 years ago, in 1995. It enjoyed one week as a bestseller, was released by Ballantine as a  paperback, then fell out of print. You can hardly find a copy anymore—except of course on Amazon, and in a few used bookstores.

Nearly a quarter of century has passed since I visited Oaxaca and spent those unforgettable days with Fernando, Charlene, and Luisa. We did not stay in touch. I wonder if they ever saw the book, and what they thought. And I’ve often wondered about Luisa. She’d be 32 now. Where did she end up? How has her life unfolded? Has her wonderful wit and intelligence flowered, or been suppressed by the vagaries of adult life?

I’m writing these words from a striped sofa, outside my room at the Parador San Roberto Lugar on calle Magnolia – in Oaxaca. Westways magazine has sent me here on assignment. I’ve been given free reign to write whatever I wish about this vibrant city—but my central quest is to find, if I can, Luisa Limon and her family.

And guess what I found? The dog-eared business card Fernando gave me when I left his city, 24 years ago. And so—as I begin my first full day here—the search is about to begin.