Gairidhara is one of those little neighborhoods where you can find just about anything, from skin lightening cream to motorcycle seat reupholstering shops. This suits me well — because whenever I return to Nepal, I prepare myself to take advantage of a quality that has not changed a bit since my Buddha-shopping days: the Nepalese ability to fix anything. In the late 1980’s, I delighted in snapping photos — admiring photos — of umbrella repair stands and disposable lighter refilling stations. For a few years I sheepishly brought my old lighters back to Nepal to be reconditioned, though I never got as far as umbrellas.

Since then, I’ve abandoned all pretense of shame and generally fill a suitcase with items that would have to thrown out, or replaced, in America. Among the personal possessions rehabilitated on this journey: a $65 ThermaRest pad, leaking at the seams (repaired at a bicycle tire mender for 15 rupees, about 20 cents); my Timberland expedition hiking shoes, which, though incredibly comfortable, are separating at the soles (20 rupees), my carry-on computer case, in need of a new leather carrying handle (60 rupees), and my $125 Sennheiser collapsible noise-canceling headphones, with amazing electronics but wires so cheap they’re worn down to a few copper threads. The minimum repair charge for these babies on the Sennheiser site is $55, plus postage. I paid my friendly Gairidhara electrician (who fixes everything from toasters to laser printers) 50 rupees, no bargaining involved.

All of which brings me back to my long-held conviction that millions of dollars could be saved if the United States government got a clue, and started a variation of what the British did with the Gurkhas in the 19th century. The most ingenious and efficient Nepali street repairmen should be found, and recruited — not as soldiers, but as astronauts. Launched into orbit, they could repair absolutely anything — from faulty space station toilets to the Hubble Space Telescope — using needle nose pliers and few paper clips, for a cost of about six bucks a pop.

Granted, the bikes are small — my 150cc Bajaj Pulsar is about average — but that’s okay, because you can’t really go faster than 40 mph anyway (and that’s when the city streets are clear, at about 3 a.m.). During the day navigation is a surgical skill, accomplished with precision along narrow lanes, many of which were not made for anything wider than a cow. That’s about the width of my scooter; but I’m also sharing the streets with vagrant dogs, taxicabs, the occasional SUV, and a chaotic mix of kids, women in saris, rolling fruit, rickshaws, ice cream carts, balloon sellers, schoolgirls, buses, baskets of onions, and many other (far more aggressive) motorcyclists. All of the above move in what amounts to Brownian motion. The concentration required compares to the most austere Zen practice. There’s no room for error; if I show the slightest bit of indecision, other vehicles roar past me within a hair’s breadth, weaving like drunken bees. If I go down, I won’t be getting up again — one reason why a friend referred to the enterprise as “meditation at gunpoint.”

Twenty-five years ago, in 1983, I arrived in Kathmandu for my first extended stay, and wrote Mr. 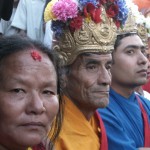 Raja’s Neighborhood. In October of that same year, I trekked to the Khumbu, the Everest region. A lean, mean 29, I carried a huge pack and spent weeks above 15,000′. This year, I’ll be returning to the Khumbu–this time with adventure travel pioneer Leo Le Bon, who founded Mountain Travel and helped open the area to trekking 40 years ago.

This year is also the 20th anniversary of Shopping for Buddhas — a story based on my search for the “perfect” statue, set here in 1988 against the backdrop of fast-changing Kathmandu. Now, 20 years later, I’m on a mission to write a story about how the past two decades have affected my relationship with Nepal. 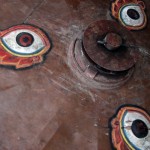 I have to say right off: there have been countless changes here, and very few of them have been for the better. “Modern” Kathmandu seems to be the result of fifty years of bad choices, one on the heels of another. Somehow, though, I still love the place, and the crippled sister it has become. As the days pass, I’ll post some vignettes from the Valley. And I’ll try to do some shopping — if I can think of a deity that might be appropriate for this time and place.

So it begins: the 10-hour flight to Tokyo; the 5-hour layover amid the cutting-edge consumerism of the Narita Airport mall, where I escaped the tsunami of irresistible electronic temptations by falling into the pummeling embrace of a coin-operated massage chair; and then the surreal, seemingly endless final leg: 7 hours on to Krung Thep, where the gray cityscape belied the warmth and comfort of Jock and Annie’s eternal abode. Arrived under tumultuous rain, the taxi throwing up sheets of water as it pulled off Rama IV Road and onto Soi 26.

Still amazing, that in a total of 27 hours I was able to transport myself from door to door: from my Oakland, California abode to this Bangkok oasis, the much-loved “Wooden House” that has sheltered so many kindred nomads.

During last year’s visit to Asia, I returned to Kathmandu for the first time in five years – and vowed to make Nepal a regular part of my life once again. I’m keeping my word. After a long weekend with my great friends Jock and Annie – and a road trip to Chaloem Rattanakosin National Park, with its famous cave-dwelling barking toads– I’ll be flying on to Kathmandu. From which point, for some reason, writing this blog seems so much more… essential.

One final note. Just before leaving the Bay Area, a friend took me to see one of the most inspiring and unforgettable films I’ve ever seen. Man on Wire instantly took a place in my all-time Top 20 Films. Beautiful, audacious, maddening and jaw-dropping, this documentary says just about everything there is to say about risking everything for one’s art. Don’t miss it.

And hey… while composing this entry, I came across this cool website, definitely worth a look: “Walking as Art.”