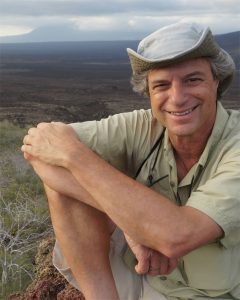 Jeff Greenwald has traveled extensively through five continents, working as a journalist and photographer. In addition he has created exhibits, lectures and educational programs for San Francisco’s Exploratorium, the University of California, The Body Shop, and the Asian Art Museum of San Francisco.

In the course of his travels, Jeff has had the opportunity to participate in a number of unusual projects. In 1979, during his first trip to Asia, he designed urban playgrounds for UNICEF and the Nepal Children’s Organization. Several months later, at the outbreak of the Khmer civil war, he served as a volunteer water engineer at the largest of the Cambodian refugee camps.

Between 1980 and 1983 Jeff lived in Santa Barbara, California, serving as Cultural and Features Editor of the Santa Barbara News & Review. Following this he published and edited an international limited-edition art journal called eye.

In the Spring of 1983, he was awarded a Journalism Fellowship by the Rotary Foundation, and departed for a 16-month residence in Kathmandu, Nepal. During this time he traveled across Asia, writing articles for GEO and Islands magazines.

Jeff’s first book was Mr. Raja’s Neighborhood: Letters from Nepal (John Daniel, 1986). Shopping for Buddhas, first published by Harper & Row in 1990, was recently released in an updated 25th Anniversary Edition. The Size of the World–a chronicle of his around-the-world overland voyage (Globe Pequot, 1995 & Ballantine, 1996)–was a national bestseller. This was followed by Future Perfect: How Star Trek Conquered Planet Earth, released in June 1998 by Viking Penguin and now available on Kindle. Jeff ‘s writings are published in print and online worldwide, and his stories appear in more than 25 travel anthologies.  A collection of his best short pieces, Scratching the Surface, appeared in 2002. His most recent book, Snake Lake, was published by Counterpoint in 2010.

In 2003  Jeff co-founded Ethical Traveler, a global community supporting human rights and  environmental protection. In 2005 he worked with Mercy Corps in Sri Lanka, assisting victims of the Indian Ocean tsunami. His dispatches appeared in several newspapers, as well as on Salon.com. At present he is the host of the Ethical Traveler Podcast.

Since November 2015, Jeff has been involved with the earthquake refugee community at Nepal’s Camp Hope in Kathmandu, introducing the camp’s children to photography. Currently he is working on two new book projects, as well as an interactive web project (to be launched on the 2017 Spring Equinox).

Jeff is a Member Emeritus of the San Francisco Writers’ Grotto, a faculty member of the Book Passage Travel Writers’ Conference, and a sworn enemy of fascism in all its forms, foreign or domestic.