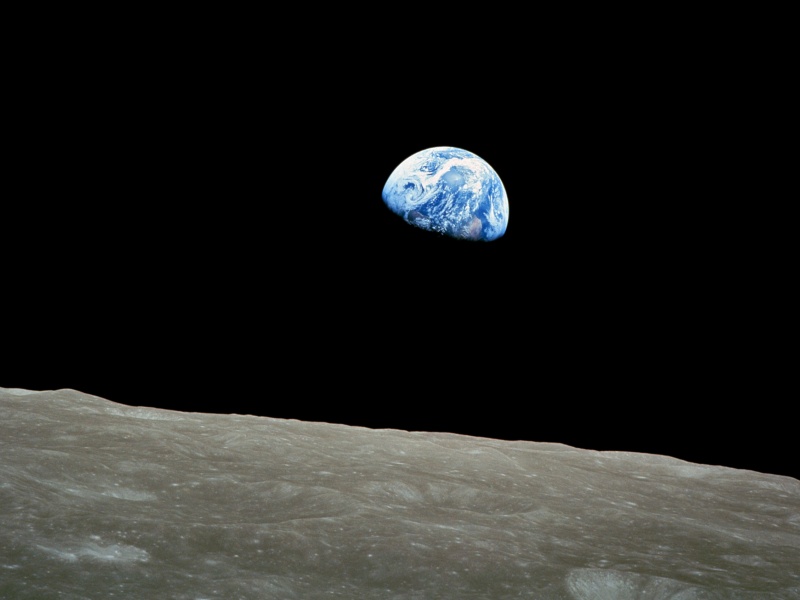 Whenever I see this photograph – taken on Christmas Eve, 1968,   by Apollo 8 astronaut Bill Anders — I think about the now-classic sci-fi film Men in Black. Planet Earth, suspended in space, reminds me of “Orion’s bell:” the bauble around the neck of an alien’s cat, containing an entire miniature galaxy. There it is: the home planet, shrunk to the size of a Christmas ornament.

As many times as we’ve seen this iconic image, how often do we really get it? Do we understand, viscerally, that everything that has ever happened to humanity – to every living thing ever known – has occurred on that glossy blue-and-white marble?

In the Hindu and Buddhist traditions, much is made of a phenomenon called satori: the moment of illumination, or awakening, that makes the delusional nature of life melt away like a sno-cone in the Sahara. Satori can be evoked by a simple phrase, feeling, or gesture. The emaciated Buddha attained realization when served a bowl of rice milk; the teacher Byron Katie awoke in a halfway house to the sensation of a cockroach creeping across her foot. For others, illumination comes with the contemplation of a koan: a mystifying paradox which short-circuits our rational thought process.

It seems to me that this astonishing photo — disarmingly simple, yet impossible to fully comprehend — might serve as the collective koan for every human being alive on this world. It is a portrait in which we are invisible, yet fully contained;   a point of view that portrays reality in an absolutely unadorned, yet utterly radiant, state. It is a vision available to non-visionaries; a miracle that requires no faith.

It is a view of our dizzying isolation, and proof of our total interdependence. And whether our Earth is just one of a billion populated worlds in this spiral galaxy, or a trinket around the neck of some alien’s cat (or both), it’s pretty frakkin’ gorgeous.

Here’s wishing all of you a wonderful New Year – on a planet that seems just a little more wonderful than it did last year.

p.s. — A marvelous essay about this famous image, by Nature editor Oliver Morton, appeared 12/24/08 in the New York Times.