As I walk along the beach at the Point Reyes National Seashore, a sleek black head pops out of the sea: Not 50 feet away, a harbor seal – an adolescent male, probably – studies me from just beyond the swell. By the time I pull out my binoculars, he’s gone.

This beach has been part of my life for 37 years. Nearby Coast Camp, just around the bend, is the first place I ever slept outside overnight. As with all first-time campers, my experience was a combination of rapture and terror. The quail, deer, and raccoons that awakened me that distant weekend are here still, several generations removed from the fauna that inhabited this park when I was a teen. Even then, back in 1975, one or two seals always appeared soon after I’d found a spot on the beach, spread out my blanket and cracked open whatever sci-fi book I was reading. They’d emerge from the surf and study me, seeming to wonder what I’d do next—or why I was doing anything at all. 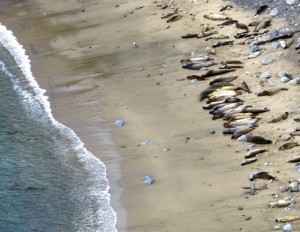 In my life apart from Point Reyes I’ve watched plenty of kids grow up, seen plenty of people grow old, and helped some people die. Many of the creatures I’ve known for years – my godson, my goddaughters, some colleagues and friends – didn’t even exist when I first visited this beach. My brother Jordan, on the other hand—as well as my father, and my grandparents —were alive back then. I remember writing my brother and telling him about waking up in the middle of the night to find a huge fallow deer standing outside the door of my tent, framed by the constellation Cassiopeia. My brother studied ancient Greek, and the moment had seemed like something right out of a myth.

The bluffs and rocks and dunes of this coastline have aged and crumbled during those years, shaped by 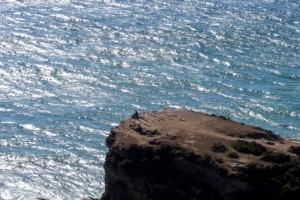 erosion and earthquakes. Point Reyes is often called an “Island in Time”; its geological origins lie more than 300 miles south, in the matching strata of the Tehachapi Mountains. The entire peninsula,  which lies just over the San Andreas Fault, has been migrating northward for millions of years.  It’s a lively place, where the ragged edges of the North American and Pacific plates scrape and shift in a perpetual renewal of the planet’s crust. Sometimes, standing on the rocks above Sculptured Beach, it occurs to me that I’m at the continent’s razor edge, a slice of real estate as ephemeral as a Tibetan sand mandala.

Though I love this seashore—and have marked its changes in a dozen journals—I don’t measure time on a geologic scale. I measure by the people who have come and gone in my life, during four decades of beach fires, day hikes, wildflowers and bobcat-sightings.

The  seal surfaces again, keeping pace with my stroll along the shore. Ready with my binoculars, I catch a glimpse of his face. The pinniped tilts his head, genuinely curious.

“Do I know you?” I call out, because alone on the beach we often speak without expecting an answer. “Did I know your father? Your aunt? Have we met before?” 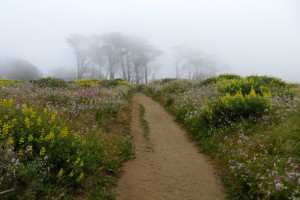 The seal disappears, exquisitely adapted to an ocean that has already numbed my feet. I didn’t recognize him, of course. But it is not unreasonable to think that, when I first visited this coastline, one of his kin watched me spread out a blanket, just as I’ll do today. For all I know, the seals themselves have kept track of me: that tall guy with thin ankles and a large beak, who used to have black hair.

Each life on this planet is a continual coming-of-age, performed with a cast of characters engaged in similar activities. We grow up and share the world with everyone, and everything, around us. For that reason I’m willing to consider these seals and bobcats, these pelicans and elk, as part of my circle of friends (or at least my network of acquaintances). Even a fleeting moment of non-verbal contact with a  seal feels strangely comforting – like spotting a former classmate, or her daughter, from atop the Ferris wheel at a crowded county fair.

They may not hear us, or see us wave, but it hardly matters. The sentiment is what counts. We’re still around, you and I. The world’s still spinning. I wish you well.

Let Some Air In

September 16th, 2013 – Monday seems a little early in the week to be baring one’s soul, but how could I turn down an invitation from The Vent? Bruce Pachtman’s fantastic storytelling series continues three days before the Harvest Moon at Stagewerx, 446 Valencia near 16th Street, San Francisco. Showtime is 8 pm. I’ll be telling one story (it may be the Iran eclipse tale), and will be joined by stellar raconteurs Micia Mosely, Joe Cole, Doug Cordell and Leslie Beam. Get your tickets here.   They’re only $15. But  if you’re a friend of mine (you are), use the code “Septvent” to  get in for 12 bucks.