A Bunch of Characters

I’m doing three events in  Nov/Dec, all  posted on my Events page; please check them out.

I also want to let all of you know that I’m tweeting now, @strangetravel  …   You might as well follow me, because I know where all the good candy is. 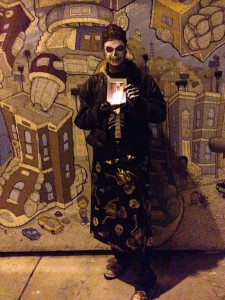 With my brother Jordan at the Day of the Dead procession, SF. Photo by Zena Kruzic

Three-Ring Circus (the best of all worlds)

November 21st, December 2nd & December 8th, 2013 – In my last couple of posts I chortled about upcoming storytelling nights at The Vent and Busting Out. Since I wasn’t pelted with organic tomatoes or carried out of town, dripping with tar, on a creosote bush, both series have invited me back for their November/December events.

Busting Out Storytelling returns to the fabulous Den at the Fox, Thursday November 21st. The theme is “Family Jewels,” and I’ll tell a story about my brother Jordan, who died in 1990 but lives on in the annals of “that story has got to be bullshit!!” oratory. It’s not bullshit; he was really one of a kind. If you think you’d like to be there, get your tickets early, as the last one was packed. Follow this link for the Busting Out Storytelling site.

Then comes Thanksgivakkuh, the eight nights of Hanukkah, and our collective slide into this great nation’s annual holiday madness. Don’t fight it; come party with me, as below.

On December 2nd, my non-profit Ethical Traveler celebrates its 10th anniversary with the 2014 World’s Best Ethical Destinations Awards at the Commonwealth Club of San Francisco. It will be a terrific evening with wine, food, fun and the opportunity to (a) meet ambassadors from the 10 winning countries, and (b) discover where you’ll be taking your next vacation. Use the code TRAVEL to get 50% off on your tickets. Here is the link to the event.

And finally, on Sunday December 8th, impresario Bruce Pachtman’s Vent storytelling series blows  the doors off of Stage Werx, at 446 Valencia near 16th Street, San Francisco. I’ll be joined on stage by gifted storytellers Chirstian Cagigal, Leslie Beam, Gina Gold and Sandy Stec. Use the code ventdec on this Brown Paper Tickets link to get tix for only $10!